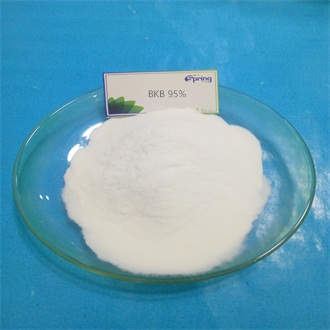 
Send email to us

Benzododecinium bromide (systematic name dimethyldodecylbenzylammonium bromide) is a quaternary ammonium compound used as antiseptic and disinfectant. It is highly soluble in water and has properties of cationic surfactant.

Benzododecinium bromide is effective against gram-positive microbes. In lower concentrations, its activity against conditionally gram-negative microorganisms (such as Proteus, Pseudomonas, Clostridium tetani etc.) is uncertain. It is not effective against Mycobacterium tuberculosis and bacterial spores. Longer expositions may inactivate some viruses.

BKB has lipophilic properties allowing it to intercalate into the lipid layer of the cell membrane, changing the ionic resistance and boosting membrane permeability or even rupturing the cell membrane. This causes leakage of the cell contents and the death of microorganisms. Because of its bactericidal effect, BKB has been widely used as a skin antiseptic and a preservative for eye drops. Compared with PVP-I and CHG, BKB is of low bactericidal concentration and lacks an unpleasant smell. BKB is colourless, making it easier to determine the wound status after BKB irrigation.However, BKB may have cell toxicity because of its destructive effects on cell membrane integrity.

Avoid contact with skin and eyes. Avoid inhalation of vapour or mist. Keep container tightly closed in a dry and well-ventilated place.

It is a kind of cationic surfactant, belonging to nonoxidizing biocide. It can be used as sludge remover. Also can be also used as anti-mildew agent, antistatic agent, emulsifying agent and amendment agent in woven and dyeing fields.

Write your message here and send it to us